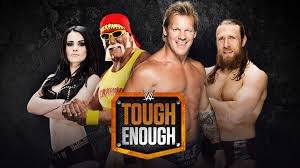 Professional Wrestling (often shortened to pro wrestling or simply wrestling) is a form of Performance Art Entertainment that combines Athletics with Theatrical Performance. It takes the form of Events, held by Touring Companies, that Mimic a Title-Match Combat Sport. The Unique form of Sport portrayed is Fundamentally Based on – and Evolved From – Classical & “Catch” Wrestling, with Modern Additions of Striking Attacks, Strength-Based Holds & Throws & Acrobatic Maneuvers. Much of these Derive from the Influence of various International Martial Arts. An Additional Aspect of Combat with Improvised Weaponry is sometimes Included.

Plus: A Tryout with a Major Wrestling Federation

The Psychology of Wrestling which is Essentially a Wrestler’s In-Ring Acting Ability to make a Wrestling Match look like a Real Fight!
It is understanding that the fans Live Vicariously through You the worker and they cheer the Baby who consistently Out Wrestles the Heel who then has to resort to and continuously Cheat to Get Over on the Baby which then builds Sympathy in the Hearts of Fans who start to become Emotional Invested in the Wrestlers by Cheering, Supporting, Hoping & Praying for the Baby’s Victory & Triumph and Simultaneously start to Boo, Hate, Despise & Long for the Defeat & Destruction of the Heel!
And when the fans see & believe that there cheering is giving hope & strength to the baby who fires up at their beck and call! or there booing strikes hate & anger in the soul of the heel, causing him to become distracted and essentially taking him off his game, they subconsciously Suspend the notion that wrestling is a work and become a super fan for that wrestler till the end of time! and that is the product of a good worker such as Icons like Bret Hart, Hulk Hogan or Stone Cold Steve Austin just to mention a few!
When you start to Understand this Concept of Good Versus Evil and apply it in Your Work! you will truly become a GREAT WORKER! who is able to give the fans Hope or take that hope Away From Them and remove the idea of wrestling being a work for a moment and Instantaneous like a Puppet Master that hangs the Hearts of Fans on the end of a String, or more accurately on the Edge of their Seats by bringing the fans to edge of ecstasy at the climax of a false finish or just as quickly destroy there hopes of victory in their Anticipation of Good Prevailing Over Evil!
Learn This & Become A Great Worker!

“You call it wrestling, they term it ‘Working’… As Shakespeare once said: ‘A rose by any other name,’ etc.” So Marcus Griffin began his groundbreaking 1937 book on the ins and outs of the pro wrestling business, Fall Guys: The Barnums of Bounce. It’s a good place to start...
Learn More

It’s a good place to start, because any discussion of the grunt-and-groaners (as Griffin would call them) inevitably involves an examination of the artifice that undergirds the endeavor, and that artifice — be it the antediluvian secret that the whole show is a put-on...
Learn More

The innovators and the masters, these are the wrestlers who have turned ordinary moves into a great spectacle. A Clothesline in one man’s hands is just another ho-hum part of the repertoire. For those who have perfected it though, it becomes Stunning & Artful.
Learn More

Professional wrestling evolved another solution, which was to dispense with actual combat in favor of theatricality and storytelling. As in opera or Kabuki, the physical style of the performers is readable from the rafters. Performers develop signature moves that are recognizable to regular audience members.
Learn More

WWE Superstars are trained performers, who go through years of experience in the ring, before putting their body at risk. When they enter the ring, they completely depend on and trust their opponent as well. When two opponents trust each other completely, the chemistry they have inside the ring becomes undeniable and...
Learn More

After all the hype, trash-talking and stare downs that usually precede a match, wrestlers do their storytelling through wrestling moves. From dropkicks to moonsaults, the cross face to the Texas Cloverleaf, this list seeks out the performers who deliver the absolute best version of 100 moves.
Learn More

Get In Touch
Who We Are
Programs
Facility
Coaches
FAQs

Welcome to the Official Website of the Workforce Fitness Performance Center! Located in Calgary, Alberta, Canada where we are continuing the Age Old Tradition of producing the Best Wrestlers in The World. Many names were trained in the City of Calgary, and all their training stemmed in one way or another from the infamous Hart Dungeon or by one of the many Workforce Fitness Performance Center Coaches.

Made with ❤ by SuperPower Media